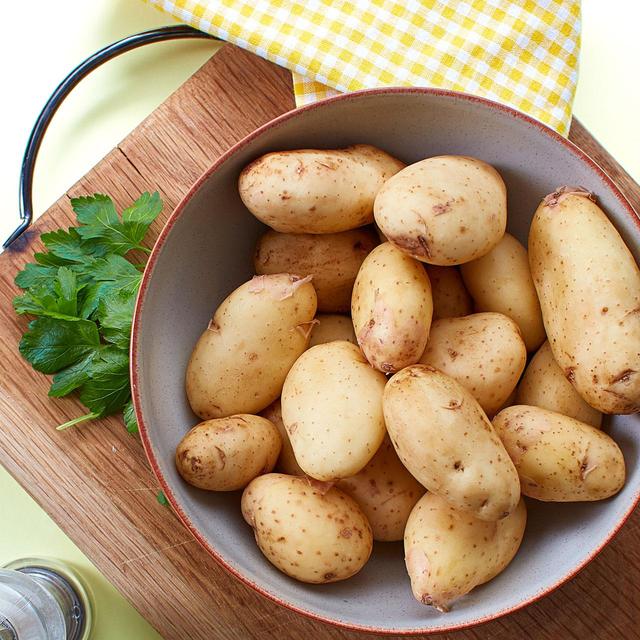 What a lovely weekend we have had full of sunshine!  Hope you enjoyed it as much as I did (apart from a fox hit who took 2 of my hens whilst they were dust bathing).

And now appears the quintessential vegetable of England – Jersey Royals Potatoes.  They have been grown on the island for 140 years and today there are approximately 20 island farmers who grow them (and often no other crops) on approximately 7,300 acres.  They are one of the few remaining seasonal foods and can only be grown on Jersey to have the name – so lets make the most of them!

For the Jersey Royals

For the soup, heat a pan until hot, then add the butter and shallots and fry for 2-3 minutes over a low heat until softened, but not browned. Add the potatoes and stock and bring to the boil, then reduce the heat to simmer for 8-9 minutes, until the potatoes are just tender. Add the watercress and continue to simmer for two minutes, then remove from the heat and leave to cool for 2-3 minutes. Pour the soup into a food processor and blend until smooth. Return the soup to the pan and add the cream. Season, to taste, with salt and freshly ground black pepper and grate in a pinch of nutmeg.

For the Jersey Royals, place the potatoes into a pan over a medium heat and cover with water. Bring to the boil, then cook for 8-10 minutes, or until tender. Drain the potatoes, then return to the pan. Add the butter and chives and roughly crush the potatoes with the back of a fork. Meanwhile, pour the cream into a bowl and add the lemon juice, salt and freshly ground black pepper. Whisk the cream until soft peaks form when the whisk is removed.

Preheat the oven to 200C/fan 180C/gas mark 6. Place the potatoes and cauliflower florets in a roasting tray, drizzle over the coconut oil and toss to coat. Sprinkle with sea salt and pepper and roast for 30 minutes until tender and beginning to brown. In the meantime, prepare everything else; brush the asparagus with ½ tsp olive oil, heat a griddle pan until hot and cook the stems until charred and tender. Set aside. For the dressing, whisk together the olive oil and lime juice, then stir in the zest and ginger and season with some salt and pepper. To assemble, arrange the potatoes and cauliflower to one side and place the other ingredients round the bowl (or how you prefer), drizzle with the dressing and scatter over the coconut flakes, or serve on the side.