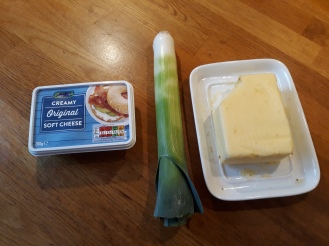 For those of you who have been following for a while, you will know that this blog is all about getting you interested in the shopping, cooking and, of course, eating of good food.  It’s not about the speed of doing it nor batch baking “to save time” (be honest, how many of you have unlabelled bags/boxes in your freezer the content of which you have no idea?).  However, sometimes, I make up a recipe that is so ridiculously non-challenging and moreish, that I just have to pass on!

John and I went out to dinner a few days ago (even people who love cooking like eating someone else’s!).  He ordered a cheese and leek pate – and it was so delicious I asked the waiter if he could ask the chef for the recipe (I’ve done this a few times and usually manage to blag them!).  Back came the answer that he would give me the ingredients – gelatine, eggs, cheese, leeks, butter etc but not the “how to”! I thought it about it on the way home, did a couple of  experiments and this is the result.  You will never make anything so tasty and so easy in such equal measurement!

Cut the leek up into thin slices – I cut down the middle and then slice.  Melt a little butter in a pan with some salt and coarse pepper.  Saute the leek very slowly until soft (keep an eye on it and move around the pan as you don’t want it to burn).  Put the cream cheese in a bowl, tip over the hot leek and blend with a stick blender until pate-like. Put into a small bowl (if you want to be super-posh in your serving, line a small tin with cling film and spoon it in  – when set in the fridge you then tip it out and slice like a cake on a plate with salad and bread).  Personally, I just eat it almost immediately with crusty bread/toast/or favourite crispbread!