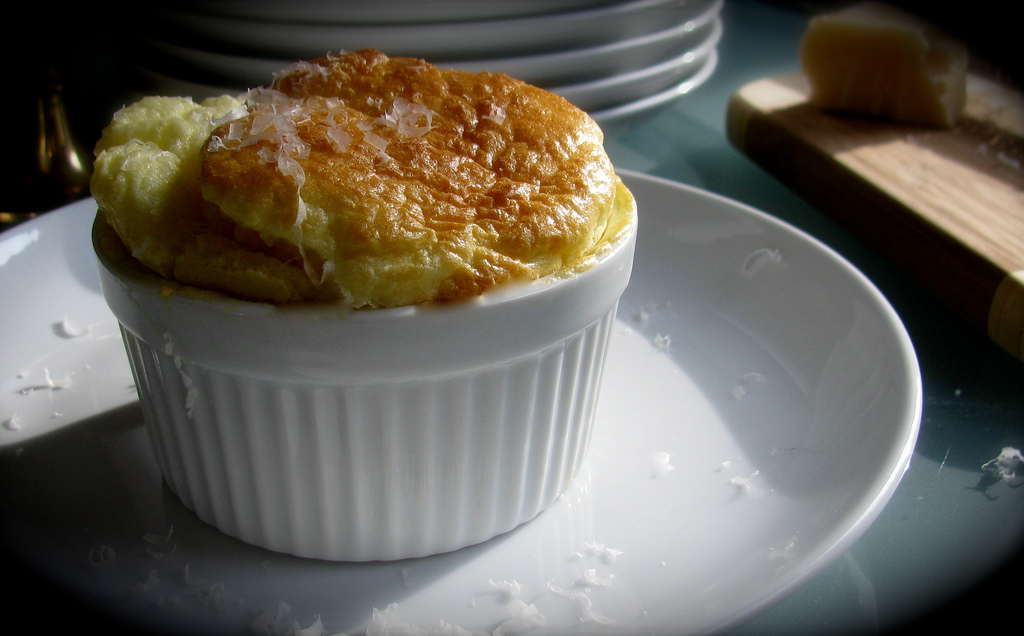 When I was first married many moons ago, I left home (I even left country – from Scotland to England) and wanting to be the “perfect” housewife,  I started cutting out recipes and sticking them in an exercise book.  I copied others and scrounged some from other people and begin to build up a library.  Some of them are written in my mum’s handwriting (she died over 20 years ago and I always look at them with a smile), some are in my daughters’ beautiful scripts – and many pages are covered with splodges of this and that!  I now have 4 of them and still collecting and it’s been interesting looking back to see have food tastes have changed.  The ones in the beginning are all meat and 2 vegish and more up to date ones lean towards fish and vegetarianism.  I went right back to the beginning, though, and found one of the first things I ever made – as a treat to mum.  In my naivety, I never knew soufflés were supposed to be difficult – but it turned out absolutely fine – proving that if you go into something scared it will more often that not not work out; but if you go into it convinced it will work, it will!

Cheese Souffle for One

5g Parmesan cheese (a tiny end bit should be enough; you only need it for the dish)
15 – 20g butter, plus a little more for the dish
15g plain flour
125ml milk (you may need a little less or more depending on how wet/dry your butter/flour paste is)
sea salt and black pepper
60g Cheddar/Gruyère cheese
1 egg and 1 egg white (did you know you can freeze egg yolks? Put them in a single container, cover with a little water and freeze. When you have enough you can defrost them and make some ice cream!)

Preheat the oven to 200°C/180°C fan/gas 6.
Grate the Parmesan for the dish and the Cheddar/other hard cheese. Separate the whole egg (break and toss the yolk between the halves letting the white drop out) and put the two whites into a bowl you can use for whisking. Lightly butter a large ramekin or soufflé dish and sprinkle in the Parmesan. Melt the rest of the butter in a saucepan over a medium heat and, once completely melted, stir in the flour and beat them together until you have a smooth thick paste. Stir this over the heat for a couple of minutes until the flour is cooked. You may need to add a little more flour if it seems too wet, or a little more butter if it seems too dry but don’t overdo it because the more you add the more milk you will need and you may end up with far more cheese sauce and soufflé than you wanted! Now take the pan off the heat and gradually add the milk, stirring in each addition before adding more. At first, it will be quite thick and lumpy but it will start to thin as the milk is added and, if it remains lumpy, add a drop more milk or use a whisk instead of a spoon to help it along.
Once you have a smooth sauce, return the pan to the heat and gently bring the sauce to the boil (it will start to bubble and look a bit like lava), stirring all the time, until it starts to thicken. Beat in the grated cheese with some salt and pepper and add more cheese to taste if it’s not strong enough for you. Take it off the heat and leave it to cool. It’s important to leave it to cool because the raw egg yolk will be added to it and, if it’s too warm, you’ll end up with scrambled egg cheese sauce not soufflé!
Once the sauce is much cooler (I think it’s cool enough when I can taste it without burning my finger) beat in the egg yolk. Finally whisk the egg whites to soft peaks (thick and foamy but still slightly droopy) and fold them into the sauce. Tip the sauce into the prepared dish and bake for about 15-18 minutes. Have a quick peek at 15 if you’re feeling brave and, if still very wobbly, leave it for a few more minutes. Serve with a green salad and give yourself a pat on the back!