The Husband and I are supposed to be in France, eating oysters and cheese and chocolate eclairs and sitting on a pavement somewhere drinking espressos and watching the world go by. I expect a lot of you had also thought you would be somewhere else as you planned your holidays on January 1st. Italy, Majorca, Spain, France – or even further afield like South Africa or Mexico.  Such is fate that we are all still at home (whichever country you are reading this in) and whilst the weather has been wonderful, the excitement of exploring a new country – it’s scenery, culture and food – is temporarily lost. So how about I  bring the country to you with dishes to share with your neighbour – both dishes are transportable to leave on a doorstep. Or just set the patio table for one, pour a glass of wine and close your eyes to imagine . . .

As we are meant to be in France, this will thus be the first – dinner for one/two/or four – Ooh La! La!

CHICKEN WITH PEAS AND LETTUCE

In a large frying pan, dry-fry the bacon over a medium heat for 3 mins until the fat is released and the bacon is golden. Transfer the bacon to a small bowl, leaving the fat in the pan. Add the chicken and brown for 4 mins each side. Push the chicken to one side of the pan and tip in the garlic and spring onions, cooking for about 30 secs, just until the spring onion stalks are bright green. Pour in the chicken stock, return the bacon to the pan, cover and simmer for 15 mins. Increase heat under the pan. Tip the peas and lettuce into the sauce and cook for 4 mins, covered, until the peas are tender and the lettuce has just wilted. Check chicken is cooked through. Stir in the crème fraîche just before serving.

CHOCOLATE FONDANTS serve 2 or 4 (if you are on your own, trust me you will still want to make 2!)

Set the oven to 180C (350F) and butter 2/4 ramekins (not sure what size mine are but they hold 130ml water when filled to the top). Gently melt the butter and chocolate together in a heatproof bowl, either over a saucepan of boiling water or in the microwave. Stir together, then whisk in the sugar, flour, eggs and salt (either with an electric whisk or just vigorously by hand). Fill the ramekins until ¾ full and bake for 12-14 minutes, until the tops are squishy but set (like an undercooked cake). You can pop them in the fridge and cook later (about 14-16 minutes in the oven if they are cold). Serve with vanilla ice cream if you have it! 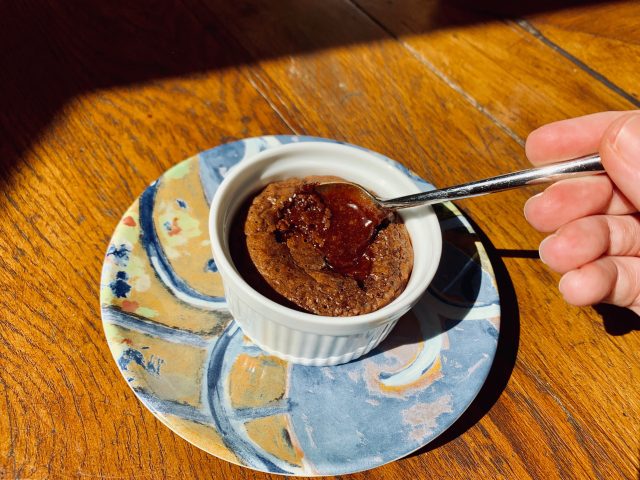 Next time – grab your sunglasses, put some Andrea Bocelli on your music player – we’re off to Italy!