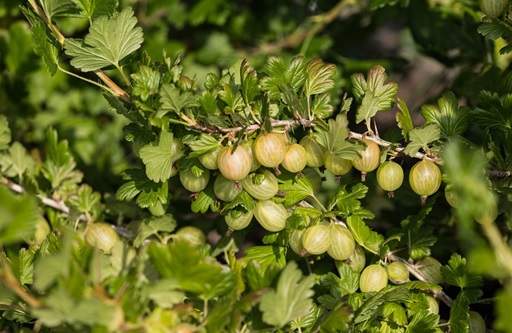 Gooseberry Season – early this year because of the wonderful weather – and so sweet I ate them straight off the bush!  I have only one bush in my garden ( a Valentine present from the Husband about 10 years ago) and each year it just gives on giving.  22lb picked in one go yesterday – and still some left to mature!  Thankfully, they freeze beautifully without any effort – just put them in a bag and freeze.  I top and tail when I need them – 22lb really would be too much hard work!  I also swap them with friends for things I haven’t got like blackcurrants (although it looks like I might have some of my own this year).  If you scroll back through blog pages you will find lots of other gooseberry recipes but have managed to find some new ones for you to try, sweet and savoury.

Gooseberry Crumble (I know everyone will have their own favourite but try this one – make the whole mix and bake on a tray, break up and put in a jar whenever you feel the need of a pudding, using whatever fruit you happen to have to hand).

Melt the butter and honey in a saucepan and add the crushed biscuits, almonds and oats.  Stir till all combined, spread out on a baking tray and bake for 15 – 20 minutes at 180oC.  Break up when cooled, put on top of stewed/baked gooseberries – and the rest in a jar for another time.

Heat all of the gooseberry jam ingredients apart from the wine in a heavy-based saucepan over a medium heat until the sugar has dissolved and the gooseberries have started to break down (approximately 15 minutes). Pour in the white wine and bring the to the boil, scraping up any burned bits from the bottom of the pan using a wooden spoon. Continue to simmer until most of the wine has evaporated and the mixture had thickened slightly. Set aside for a few minutes to cool slightly. Strain the jam mixture through a fine sieve, collecting the strained liquid in a clean saucepan. Reserve the strained pulp. Bring the strained liquid to the boil, then reduce the heat until the liquid is simmering. Continue to simmer until the volume of liquid has reduced by half and thickened. Transfer the strained pulp to the bowl of a food processor and blend until smooth. Add the reduced liquid to the jam as necessary, blending to combine, until the consistency of the jam is to your liking (you may not need all of the reduced liquid).

Heat the sugar in a large, heavy-based pan over a low heat, stirring well until it has melted and turned golden-brown (CAUTION: boiling sugar is extremely hot. Handle very carefully. Use a deep pan to avoid bubbling over.). Stir in the sultanas, thyme, ginger and shallot. Add the cider vinegar and gooseberries to the pan, stir well and bring the mixture to the boil. Reduce the heat and simmer gently for 8-10 minutes, stirring occasionally, until the gooseberries have softened and broken down. Season, to taste, with salt and freshly ground black pepper, then set aside to cool slightly. Serve with mackerel or fish cakes.

crumble in a jar